After a Great Success of TechnoXian’18 at THYAGARAJ SPORTS COMPLEX, New Delhi (India), further registrations for World Robotics Championship & International Robotics League  Event TechnoXian 2019 have started now. We’d like to invite you to participate in such a grand event. You may send across your team to represent your school/college/club. 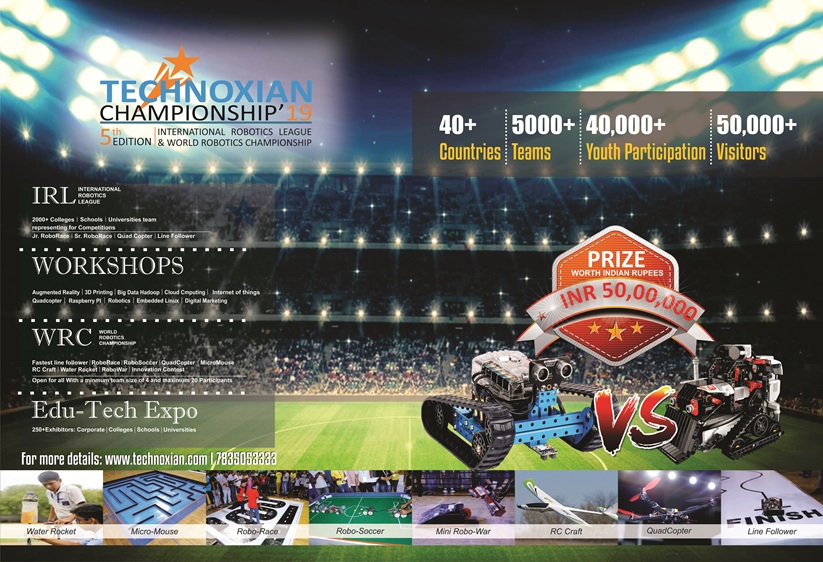 o    INR 1.10 Cr. worth Awards allocated for entire series of IRL and WRC.

o    Certification from “All India Council for Robotics & Automation (AICRA)”  to all participants.

o   3 Days series would have lots of robotics shows by internationally recognized performers.

Competitions Information: There are to international level of championship wherein your team can represent and participate.

A team upto 10 participants can register themselves for one or more than one following WRC competitions.

Institutes and academic center may also represent for International Robotics League’18. Following are the competitions in IRL category.

1)       Jr. Robo Race Challenge: This challenge is open only for schools. A team of 10 participants would represent their school and compete with others.

2)      Sr. Robo Race Challenge: This challenge is open for all education institutions including colleges. A team of 10 participants would represent their institute and compete with other institutes. Eligible participants should be doing engineering graduation or post-graduation.

You are invited to attend TECHNOXIAN ( WORLD ROBOTICS CHAMPIONSHIP )