"Rethinking gives you permission to use your thoughts to change your mind. Take what is and spin it around to give you a new review and fresh perspective" - Susan C Young

The need of the Hour? A powerful opportunity yet a challenge? Why Change? What drives you to be the change? #RETHINK

Are you a contributor to a creative future or a survivor of past history?

Do you have an unmet goal? NOW is the time to RETHINK your vision!

Have you lost an opportunity? NOW is the time to RETHINK your choices!

Be it any field of work, how far are you willing to go and RETHINK?

Contribute to the future as we celebrate and salute exceptional RETHINK'ers
We invite curious and questioning minds to join us in the amazing journey of exploration and wonder.....
On September 16, 2018 - join us for a full day of brilliant speakers, mind-blowing conversations, thought-provoking videos and fabulous networking opportunities!

Defying odds at a young age, Meghana Gundlapally is an international award-winning Rhythmic Gymnast from India. Meghana was the only participant from India for Rhythmic gymnastics in the XXI Commonwealth Games 2018 and the highest scorer for the country. She has also achieved one of the highest scores at Ness Ziona International Tournament. She is currently being trained by Greek Olympian Varvara Filiou and has built her International expertise across the globe being mentored by multiple coaches in her career from various countries. She is highly dedicated and trains herself for nearly 6 to 8 hours daily, following her rhythmic passion. 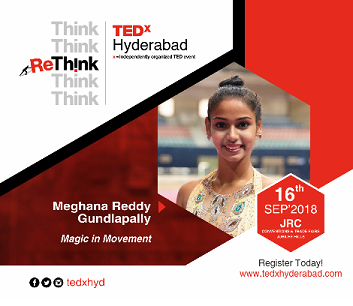 Dr Falguni Vasavada-Oza takes pride in calling herself a Happy Person. A multidimensional Influencer, she holds a Ph.D. in Advertising and has been teaching for two decades in the area of Marketing and Advertising. She is currently a Professor at MICA and loves to analyze how brands grow through the power of communication. Dr. Oza is a strong believer in Gender Equality, Body Positivity, Women Empowerment, Work-Life Balance and Happiness as a Lifestyle and Motivation. She inspires to accept one's body and always focus on creating a strong personality that goes beyond physical attributes. 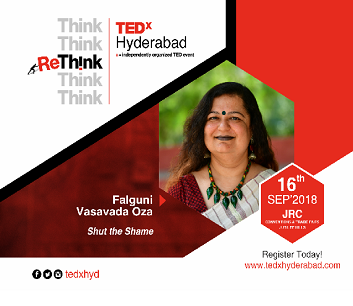 Harish Sadani runs an organisation called Men Against Violence and Abuse (MAVA), a one-of-a-kind organisation of feminist Indian men, that portrays patriarchy as a common enemy of women and men. Harish is an Ashoka Changemaker Awardee, with a Masters in Social Work from TISS. The impact of the work Harish does on gender and masculinity among young men in India has been documented by Government of India and Harvard University’s South Asia Institute. Harish has been passionately running multi-sector developmental programs on gender and health for over 26 years! 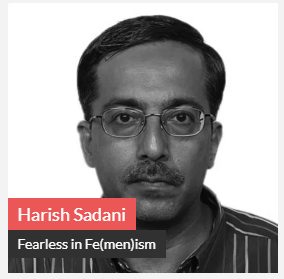 Sanjay Thumma better known as Vahchef, is an admirable Indian Chef and Entrepreneur in culinary arts in Indian cooking. He is among the top 10 YouTube stars from India. YouTube honored him the lifetime views in the YouTube channel which has reached up to over 290 million viewers. vahrehvah.com is the most watched chef across the globe as Sanjay, shares an inseparable bond with his audience. In fact, YouTube calls him DNA of YouTube India. Recently, Vahchef is assigned as a “Culinary Ambassador” for The Indian Federation of Culinary Associations, IFCA India. 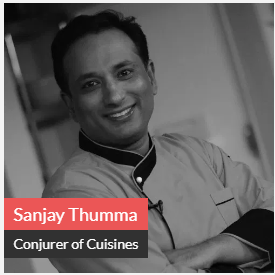 Vijay Chadda has 45+ years of professional experience with 20 years, serving in the Indian Army. He has headed leading corporates however his innate desire to give back to society meaningfully, drew him from the corporate world to the Foundation. Under his leadership, the Satya Bharti School Program Bharti Foundation, provides free quality education to over 45,000 children from marginalized communities in rural areas, through its 254 schools across six Indian states. His army background inspired many processes and events to inculcate a sense of patriotism and integrity within the school program. He is part of various National Committees in the area of Education, Skill Development and Corporate Social Responsibility (CSR) and on the Advisory Committee of leading schools and educational institutions. 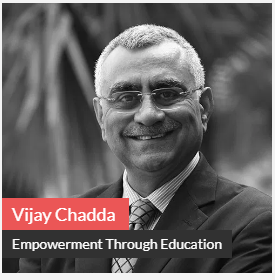 Sandeep Sangaru is a multidisciplinary designer and entrepreneur. He studied Industrial design and Mechanical Engineering. He won several awards and accolades, including the Red Dot Design Award in 2009 (considered to be the Oscar of product design) and the British Council’s Young Creative Entrepreneur Award – Design for Social Impact in 2012, among many others. His designs have even made it to Christies’s. Since inception his studio has been actively involved with the craft sector working with local people and local material to create global products.

He has worked with bamboo craftsmen in Tripura, the community of Khatamband artisans in Kashmir to revive the lost craft of Pinjrakari and with Channapatna’s wood-and-lacquer artisans. In his free time, this Star Wars fan enjoys taking vacations in remote mountains “where one gets cut off from everything normal” 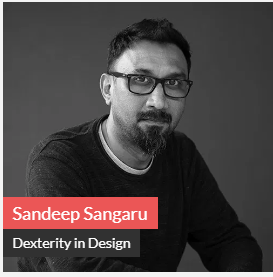 Colleen Lightbody is the owner of Brainwise Coaching and Learning Systems. Her area of expertise lies in Neuroscience, Mindfulness, Brain-based Learning, Personal and Professional Leadership, and Emotional Intelligence. She is becoming known as “The Brain Guru” through her writing for blogs and magazines, as well as in television and radio interviews. Her positive and energetic style reflects the passion she has for living a life where her core purpose is to be a catalyst for change. From being an over weight alcoholic to climbing Kilimanjaro and Everest Base Camp, to achieving Provincial Colours in both Cycling and Triathlon, completing Iron Man Challenges, and many cycling races and ultra-marathons, Colleen Walks the Walk of Personal Mastery. 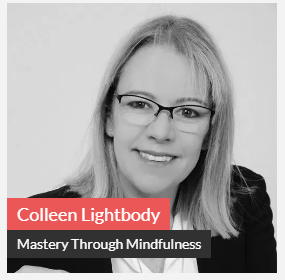 Anshul Sinha brings a difference by wielding his camera to create movies that address important issues. His most notable movies are ‘Gateway to Heaven’ on human corpse trading and ‘Mitti – Back to roots’ on agrarian crisis and farmer suicides. He has participated in more than 500 film festivals so far, winning more than 100 national and international awards, and continues to make an impact with his movies. 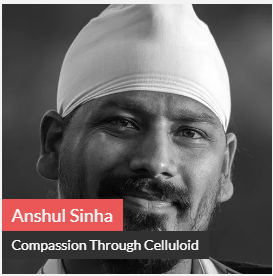 Atool Sinha is an officer in the Indian Navy, an accomplished yachtsman, a navigator and a coach. He has to his credit several International Sailing Medals which include Two Golds, Three Silvers, and Two Bronzes. He also bagged 14 National and 44 sailing medals in the Indian Navy. His noteworthy medals are Asian Games Silver Medal (2010) and the Shiv Chhatrapati Shivaji Award (2014). Captain Sinha also holds a dual specialization in Navigation and Direction and Nuclear and Biological Warfare. The first women Naval Officers team on the historic voyage of “Navika Sagar Parikrama” were mentored by Captain Sinha as Officer-in-Charge of the Ocean Sailing Node. 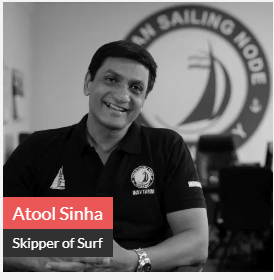 General V.K. Singh, PVSM, AVSM, YSM (retd), is an Indian politician and a decorated and retired as the Chief of Army Staff. He is the Union Minister of State (MoS) for External Affairs in the present government. He started his career as a military officer and became the first ever commando in the Indian Army to have been promoted to the General rank. On 11 March 2011, General Singh was inducted into the United States Army War College (Class of 2001 graduate) International Fellows Hall of Fame. He is the 33rd International Fellow and the first Indian Armed Forces officer to be inducted in this. He is also a graduate of US Army Rangers Course at Fort Benning, USA and US Army War College, Carlisle, Pennsylvania. “Courage and Conviction” is the name of his highly acclaimed autobiography. 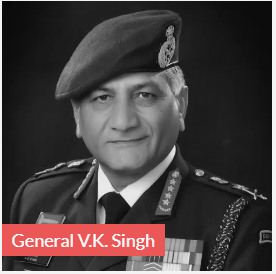 Dr. S.K. Joshi, Chief Secretary to Government of Telangana, is a multidimensional intellectual who joined the Indian Administrative Services. He is a Master of Technology and also holds a PhD (2010) from TERI School of Advanced Studies on “Inter-Governmental Fiscal Transfers and the Environment – A Study of India.” As a key negotiator of India, he has travelled to several countries and participated in bilateral and multinational negotiations. He was associated with the United Nations’ Conference on Environment and Development (1992), Rio de Janeiro and the United Nations’ Summit on Sustainable Development (2002), Johannesburg. He has authored a book titled ‘Management of Transboundary Water Resources.’ 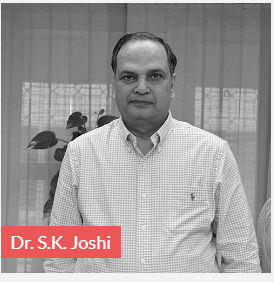 Vibrancy through Versatility
Tabu, is regarded as one of the most talented Indian actors of her generation. She was awarded the Padma Shri in 2011, besides winning National Film Award for Best Actress twice, six Filmfare Awards, including a record four Critics Awards for Best Actress. She is best known for playing protagonists in films that garner critical appreciation and she often gets appreciated for her intense and serious portrays. Her magic has been felt down in the South Indian film industry and internationally as well. Tabu has done films in Hindi, besides, English, Telugu, Tamil, Malayalam, Marathi and Bengali language

Dr. Vikas Singh:
Impacting through Inclusion
Dr. Vikas Singh is a social entrepreneur and founder of Crux Management, consulting for governments and large businesses. He is associated with ISB, UNICEF, ILO, GIZ, and UNDP. He has worked on Swachh Bharat, PMJDY, digital literacy, demonetization, APY, Polio Program (with UNICEF), and entrepreneurship (with UNDP). He is a columnist with several well known publications. Dr. Singh has worked on building capacity, enhancing awareness, and enabling inclusion and these initiatives have impacted over millions of Indians. 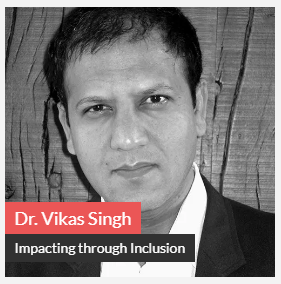 Bel Pesce :
Aptitude made Accessibly
Bel Pesce is an MIT grad, and author and an entrepreneur focused on democratizing access to relevant information, and finding solutions to challenges in a collaborative and empathetic way. She has been voted as Forbes 30 Under 30, BBC’s 100 Most Inspiring Women in the World and TIME Magazine Next Generation Leader. Bel is addicted to learning, and constantly shares what she learns in a simplified way. Bel designed her life to exponentiate lessons learned, connections and experiences. Her TED talk on ‘5 ways to kill your dreams’ is one of the most watched talks in the world. 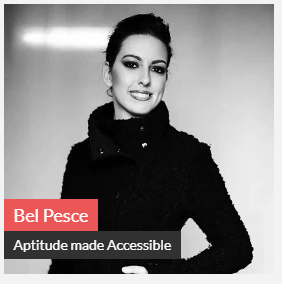 G.V. Ramanjaneyulu :
Crusader for Cultivation
As a scientist who has transformed the landscape of Indian agriculture, Dr. Ramanjaneyulu GV and his organization Centre for Sustainable Agriculture (CSA) work on public policy issues impacting food systems and farmers livelihoods and a framework to ensure income security for farmers. He has built a Community marketing System ‘Sahaja Aharam’ linking farmer cooperatives directly to consumers. He has won many awards, including one from World Bank, and has authored several books and articles on sustainable agriculture and public policy. 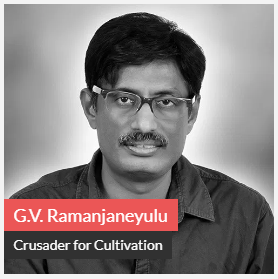 You are invited to attend TEDxHyderabad 2018