Gandikota is a village on the right bank of the river Pennar, 15 km from Jammalamadugu in Kadapa district, Andhra Pradesh, India. Gandikota is home for Kamma Kings who ruled this fort for nearly 300 years. Gandikota was ruled by powerful Telugu dynasty, the Pemmasani Kamma Dynasty also known as Gandikota Kammas, and was one of the most prominent forts in the country. The fort of Gandikota acquired its name due to the 'gorge' (in Telugu it is called 'gandi'), formed between the Erramala range of hills, also known as Gandikota hills and the river Pennar that flows at its foot, reducing its width to a mere 300 ft (look for the river image in the montage/main image). Situated amidst beautiful landscape and wild forests, it is endowed with vast natural resources.

One story of the site's origin is as follows: The sage Agastya wanted to build a temple for Lord Venkateswara on this site. However, the statue that was made could not be installed as the toe nail of the idol got broken. The sage was upset over this and performed a penance for Shiva. When Shiva appeared, he said the place suits Shiva better as it resembles Kailash. Agastya then requested Shiva to give the devotees a Parvathi Goddess as Lord Uma Maheswara in a single stone, which Shiva obliged. 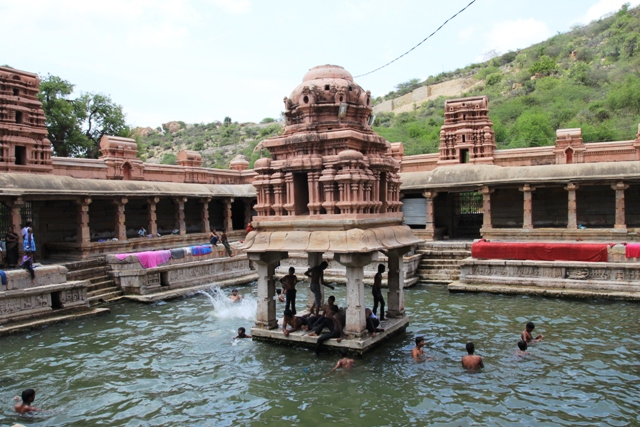 A second story is as follows: Chitteppa, a devotee of Shiva, was worshiping Shiva and Shiva appeared to him as a tiger. Chitteppa understood that it was Lord Shiva in tiger form, and shouted Neganti Shivanu ne kanti (meaning: I saw Shiva I saw), and danced with joy. There is a cave called Chitteppa nearby. Sri Yaganti Uma Maheswara Temple is one of the few temples patronized by one of the great dynasties of India. Every year Maha Shivaratri is celebrated and a large number of devotees from all over Andhra Pradesh visit. Shiva, Parvati and Nandi are the main deities in this temple.This temple is 14 km away from Banaganipalli in kurnool dt. The saint lord Veerabrahmendra swami stayed here for some time and wrote Kalagnanam.

What to bring: (mandatory)

4) Sun screen, Sun glasses, hat or cap as it will be hot afternoons

5) A small pocket knife (if you have a Victorinox -SWISS ARMY knife then great..).

8) Garbage bag to collect any litter we may create (or other people have created).

2) Carry all documents of bike.

3) Fuel costs shall be shared accordingly.

4) We strictly follow -leave no trace policy (even if it’s a banana peel / or and orange peel) no trace should be left.

5) Strictly no alcohol during the whole trip.

You are invited to attend Ride to Gandikota - BARS