Interactive Session on GST Transition and the Way Forward

Interactive Session on GST Transition and the Way Forward

The journey to bring about the most significant reform of indirect taxes in the country by way of the implementation of the Goods and Services Tax (GST) has reached its final phase. The Central legislations for introduction of the new indirect tax regime have been enacted and the States are in the process of adopting the corresponding GST legislations. Considerable progress has been made in putting together the subordinate legislation with several of the GST Rules having been finalized by the GST Council. The Council is also set to debate the GST rates for supply of different kinds of goods and services.

The Central Government as well as the States are well on track to roll out the new indirect tax regime with effect from 1st July, 2017.

In keeping with the current developments, FICCI is launching its third series of Interactive Sessions on GST. Unlike the previous sessions which dealt predominantly with concepts of GST, the current series of sessions will focus more on the implementation aspects of the new tax system in the context of the Central GST Acts and the draft Rules that have been put out in public domain.

With a view to appraise the businesses of the manner in which they need to prepare themselves for a smooth transition to the GST, FICCI is organizing an Interactive Session in collaboration with the KPMG India as per following schedule:

The day-long event will provide an overview of the GST framework with an emphasis on the provisions relating to transition and compliance. Other important topics proposed to be covered in the sessions will be input tax credit, job work, export/import transactions, input service distributors, filing of returns, etc. Sufficient time is also being provided for the participants to clarify theirs doubts through the extended Q&A sessions.

The Interactive Session would be conducted as per following programme:- 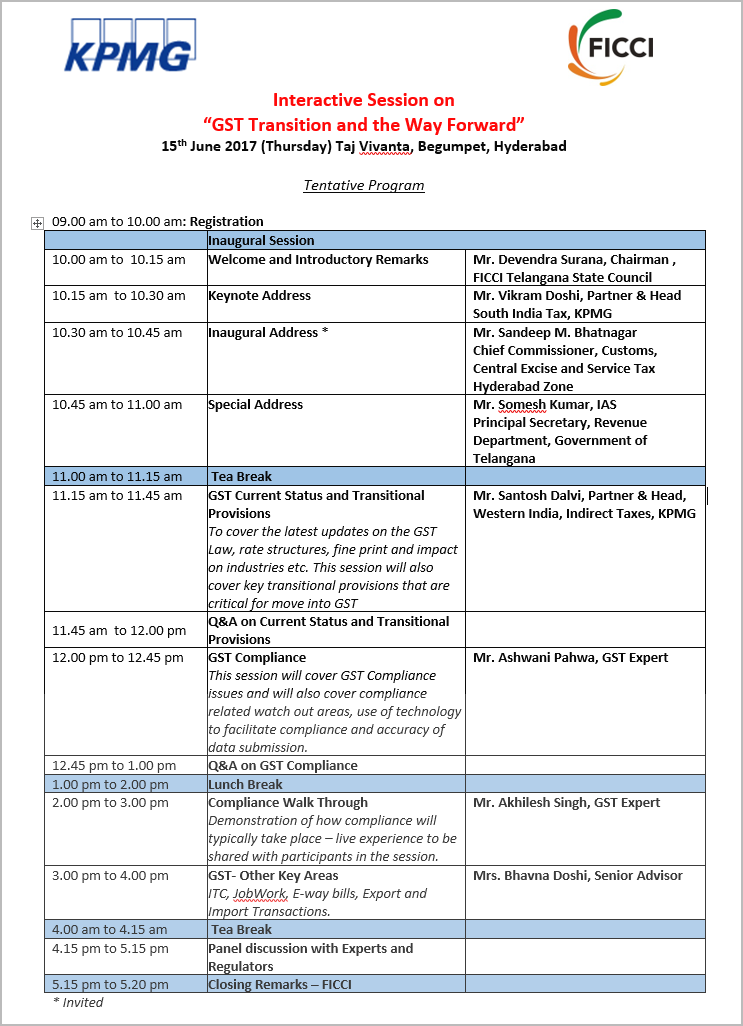