Suraj Jagan is an Indian playback singer. He is noted for the song Give Me Some Sunshine from the award-winning movie 3 Idiots. The song received the "Best Emerging Male Performer" award in the Max Stardust Award.[citation needed] Jagan's singing career began in 1990, and has included both solo work and as front man for the rock band Dream Out Loud. He has also worked in advertising jingle campaigns, Bollywood playback singing, acting in theatre productions and an acting role in the Bollywood film Rock On.

Suraj Jagan began his career working in ad jingles, including the jingle You and I in this beautiful world for the award-winning[citation needed] "Hutch TVC" ad, before making his Bollywood debut with the song Hum Naujawan Hai from the movie Pyaar Mein Kabhi Kabhi in 1997. The song was given to him by fellow rock vocalist Vishal Dadlani, who was one of the music directors of the film. 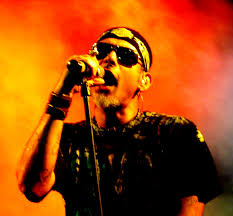 From 2007 onwards his Bollywood playback songs included "Hey Jhonny" from Johnny Gaddaar, Dum Lagaa from Dil Dosti Etc and "No Big Deal" from Money Hai Toh Honey Hai. He has also sung the song Zehreelay from the movie Rock On!! where he actually performed the song in the movie. He played a part in composing the song and starred in a short cameo in the film with the role of 'Ajay'.The blog Aspi's Drift claimed at the time that Zehreelay was the first Death Metal song used in a Hindi film.

In 2009 he recorded the song "Give Me Some Sunshine" for the film 3 Idiots. The film's music director Shantanu Moitra composed the song with Suraj Jagan's voice in mind, and stated that if the movie's producers did not like Suraj Jagan's voice with the original composition, he would change the tune but would not compromise Suraj Jagan as the singer of the song. Jagan said that "I’ll always be grateful to him for that